“The Age of Charisma” by Hamlet Lavastida 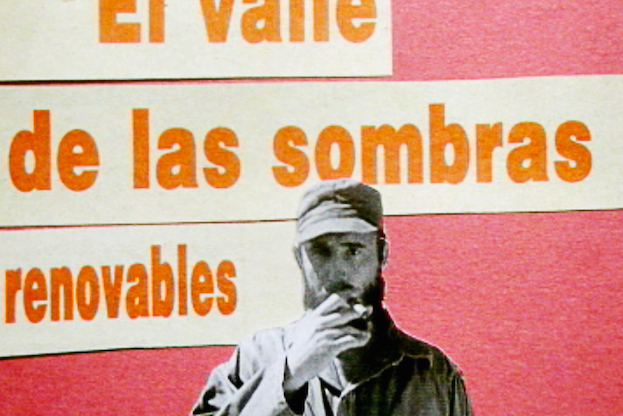 The ridicule of these paradigms comes with a pop aesthetic, considering the spot colors on the background; and a dose of classic insular choteo, I scheduled a folk music that adds some dreamlike dimension. From an ethical and conceptual, these video follow a similar to that of the Latin American ICAIC- News, logic and documentary work of Nicolas Guillen Landrián, another smart Cuban secreted by the windings of socialist power.

Lavastida found an infinite path to risk their artistic ideas, being a historical and social phenomenon that is not exhausted and still has echoes in other parts of Latin America. So, while there are arbitrary societies.

Lavastida, graduated in 2009 from the Higher Institute of Art (ISA) in Havana, Cuba emerges in the art scene from its relationship with the Department of Arts of Conduct, led by Tania Bruguera. Since then, his works become stronger as a political activist by the performance of civic resistance, since it is interested in removing the rhetoric of socialist orthodox, effective speech between 1960 and 1990 (crippled in the eyes of a generation formula skeptical that longer believes in the unifying power of the slogans). However, his biggest motivation lies in the recovery of plastic language, contained in revolutionary propaganda graph (direct legacy of the Soviet school and especially the Polish poster).  An iconography that was part of the daily life of the Cuban people buried today by collective amnesia and a symptomatic loss of historical memory.

For the same reason the artist appropriates the logos of institutions taken as sacred as the Communist Party of Cuba (PCC), the Ministry of the Interior (MININT) or the infamous Military Units to Aid Production (UMAP), then desacralizarlos did at the time, as Marcel Duchamp or Andy Warhol with the Gioconda or Mona Lisa either giving it a more suspicious another meaning to the acronym or varying the original appearance of the posters to establish a formal game that emulates art optical or the cover of science fiction books (the latter is a, although severe nuance relevant if we consider the analogy).

Lavastida, reveals the absurdity of these historic brands and at the same time, long demystifies the coercive scaffolding used to summon the crowds, in a country where surveillance, the enemy and the need for savings, but words were a command mode life. These same ideas are outlined by a bold and ironic in the video-assembly comprising the sample collages. There, the artist brings together recorded the historic leader of the Cuban revolution, Fidel Castro, along with press photos and news clippings to relive moments from the past, but not out of nostalgia, but from a critical examination speeches.