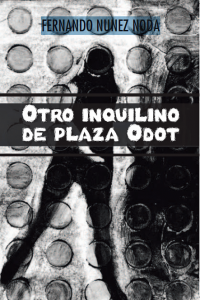 ovember 20, 2014.- Otro Inquilino de Plaza Odot (“Another Tenant of Plaza Odot”) is the name of Fernando Nunez-Noda’s first novel which, in his own words, is a journalistic thriller, “one investigated not by a police officer or detective, but a reporter.” It is to be presented at The Chill Concept on Thursday, November 20th at 8:00 pm.

Nunez-Noda is a journalist with a cybersociety blog on The Huffington Post and essayist in his website Ciberneticon.com, but mostly a fiction writer with very acute and challenging themes, as much as unique stories.

Someone lives clandestinely in offices and apartments of Plaza Odot, the hemisphere largest mall, the largest mal of all hemispheres. That illegal “tenant” has obsessed manager Emilio Ruggerio and many owners. Who dares to challenge the surveillance and control of the consortium? A depressive journalist investigates the case moved by a romantic interest in Ruggiero.

When is close to be captured, the Tenant always escapes. Until one day, they said he was found dead. Case closed? Later an official of the consortium receives a letter from the Tenant himself. Posthumous prank or message from someone still alive? What the Tenant says in that letter is the body of the story. How could he, for example, go unnoticed or lead the army of underworld called the “Moba”?

“Another Tenant of Plaza Odot develops in an unnamed city, surrounded by freeways and hills”, says the author. It could be Caracas, Mexico City, Sao Paulo or Miami. Feelings and human processes that drive this story are obsession, mutation, vanity, simulation, depression, fear and finally liberation. Liberation from everything and yourself. ”

This brings us to the underworld Nunez-Noda has built to recreate his passion for parallel worlds or perhaps realities, not behind, but inside the shadows.

Nunez-Noda says the story comes from watching “how the city is getting full of smaller towns, internal villages with artificial climate with micro environments. The triumph of the architectural over the organic “. He says: “Plaza Odot is the largest commercial center in the world and is a very artificially cold covered space, even when the outside has one scorching sun. The rest is history. This story “.

Otro Inquilino de Plaza Odot is available for purchase at Amazon, Barnes & Noble and other online bookstores where you can get it on paper or eBook version. The book’s website is written plazaodot.com and Nunez-Noda´s blog is ciberneticon.com. The YouTube Channel: http://bit.ly/1qqPDA9