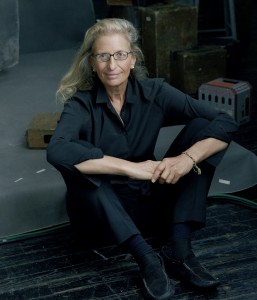 [Press release] Annie Leibovitz is the recipient of The Páez Medal of Art 2015, given by The Venezuelan American Endowment for the Arts (VAEA).

The Páez will be bestowed to Leibovitz in a ceremony during VAEA’s Annual Benefit Gala on November 18th 2015 at the David Rubenstein Atrium in Lincoln Center, New York City.

The VAEA is honored to celebrate the work of Annie Leibovitz, an artist whose unique vision and dedication have earned her a place in the history of art as one of the greatest creators of her generation. Leibovitz will be the first North American woman to receive The Páez Medal of Art.

It is of special significance for the VAEA to bestow The Páez Medal of Art to Leibovitz, on our 25th year anniversary, as she was part of the VAEA’s inaugural exhibition in 1989 titled 5X5, 150 Years of Photography, which was curated by Anne Horton with texts by Helmut Gernsheim, and was exhibited in several venues in Venezuela and Colombia.

The 2015 Gala Leadership has the pleasure to invite you to VAEA’s Annual Benefit Gala honoring Annie Leibovitz with The Páez Medal of Art:

About Annie Leibovitz
The American photographer Annie Leibovitz’s outstanding contributions to the art of photography in her forty-year career are numerous and exceptional. Leibovitz started her artistic journey as a photographer for Rolling Stone magazine, producing many of the now iconic images of the cultural scene of the seventies. In 1983 she joined Vanity Fair magazine, where she continues to elevate the art of portraiture; her trademark style and unique aesthetic sense have helped define the magazine’s look. Since the early 1990s, she has also been a regular contributor to Vogue. In addition to her magazine editorial work, Leibovitz has developed an impressive body of work that has been exhibited by major museums and art institutions worldwide, including the National Portrait Gallery in London, the Maison Européenne de la Photographie in Paris, the Hermitage Museum in St. Petersburg, Russia, and the Smithsonian American Art Museum in Washington, D.C. Leibovitz is the recipient of many honors. She has been designated a Living Legend by the Library of Congress, awarded the Centenary Medal of the Royal Photographic Society in London, and received a Lifetime Achievement Award from the International Center of Photography and the Prince of Asturias Award for Communication and Humanities.