Miami, FL – Nina Fuentes, creator of The Chill Concept Museum, was recognized by the Board of the Miami-Dade County. Carlos A. Gimenez, Mayor of Miami-Dade County, Chairman Jean Monestime and the members of the board of county commissioners, on behalf ofMiami-Dade County and this community, proclaimed Monday, February 16, 2015 as “Nina Fuentes Day” 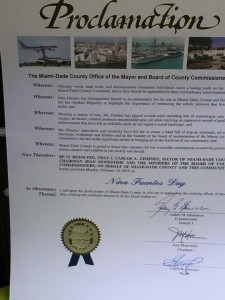 They distinguish Ms. Fuentes’ innovation and creativity as “ambassador for the arts in the Miami-Dade County” because she “has made significant strides in bringing art to the forefront of our community.”

The Board of the Miami-Dade County noted on the proclamation document that “is proud to honor this visionary for her invaluable contributions toward the promotion of artists, curators and exhibits in our society and abroad.”

Some of the activities done by Fuentes mentioned on the document are: the creation of a pop-up museum, the realization of art complex functions, workshops and lectures, and her participation as founder of the board of incorporation of the Miami Art Dealer Association.

They also noted that Fuentes’ achievements in all her different roles as “museologist, arts activist, curator, art dealer, cultural producer and philanthropist (…) have left an indelible mark on our region’s social and artistic landscape.”

This recognition is part of the incentives Miami-Dade County gives to “exemplary individuals” with “extraordinary achievements” who “through vision, hard work, and determination (…) leave a lasting mark on the minds of Miami-Dade County’s residents.”

Proclamation was given to Nina Fuentes the same day she was doing a performance called “Miss Wynwood Day” through her role as visual artist AKA Nina Dotti. Proclamation was read by Miss Active Puerto Rico 2011, Desiree del Rio, and placed in a time-capsule, with other representative objects of Wynwood, to preserve County’s memory.