The Venezuelan American Endowment for the Arts (VAEA) turns 25 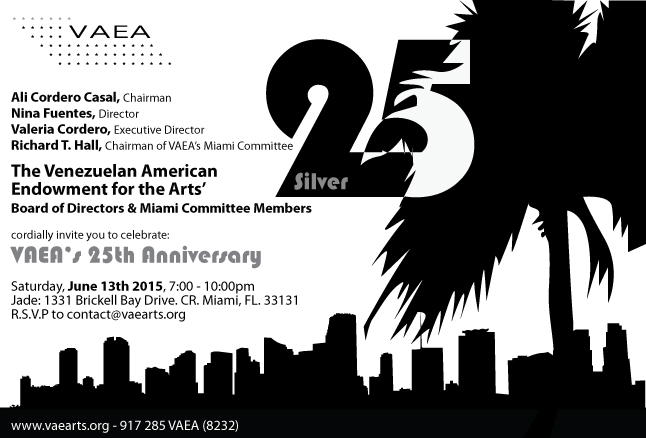 The Venezuelan American Endowment for the Arts (VAEA) is pleased to announce that June 13th 2015 marks the date of VAEA’s 25th Anniversary. On June 13th 1990 in New York City, Ali Cordero Casal, founder of VAEA together with the founding Board of Directors, gathered at the Royalton Hotel for a luncheon celebration of VAEA’s creation. Now, 25 years later, we are very happy to commemorate this important milestone with the launching of VAEA’s Miami Committee.

For the past 25 years, VAEA has grown and developed its mission of strengthening the ties of friendship between Venezuela and The United States through bi-national cultural and social programs. Some of VAEA’s programs and initiatives include: VAEA’s Páez Medal of Art, which is offered once a year to an individual or group that has had an impact and contributed to the excellence, growth, support and proliferation of the arts. It has been awarded to Sofía Imber (2014), Robert Wilson (2013) and Carlos Cruz-Diez (2012). VAEA’s 5X5 visual arts exhibitions have shown the work of 40 artists in over 10 venues around the world. Our educational program El Museo y La Escuela, has taken hundreds of children to art exhibitions and cultural activities both in Venezuela and USA. VAEA’s Grants program has helped over 20 artists and organizations in critical stages of their artistic careers realize their projects. These are a few of VAEA’s initiatives, to learn more visit our website VAEArts.org

Reaching this important landmark invites reflection of our past accomplishments and also is an opportune time to look into the future as VAEA plans to continue to grow and develop, under the leadership of Executive Director Valeria Cordero and with the support of the Board of Directors; we are very excited to announce the establishment of VAEA’s Miami Committee. With this important initiative VAEA aims to establish a stronger presence in this important region in order to advance our mission and expand our programs.